“This report will help to heighten the awareness of how we can unite our community to reduce achievement gaps and help children throughout Clark County succeed,” said Bob Morgan, UWSN President and CEO.

The State of Nevada is consistently near the bottom of education rankings for high school achievement. The state had the lowest rate in the country in 2012-2013 (63%), a figure that improved in 2015-2016 but still falls behind the national graduation rate. Clark County School District (CCSD) is the largest school district in Nevada and the fifth-largest in the United States, serving over 320,000 students at 357 schools. UWSN is working closely with Clark County School District and other nonprofits to increase the high school graduation rate, which was 74% for the Class of 2016.

Nevada has the lowest graduation rate in the country for Black students, as well as the second-lowest for English Language Learners (ELL). For ELL, Black, and Hispanic students, achievement gaps in high school perpetuate cycles of poverty and widen already-existing socioeconomic differences.

How does the  Graduation Rate  Vary by Type of School?

School performance can also be examined  by the type of school, that is, whether the school is a magnet or  career and technical academy (CTA), neighborhood or other type of school.

What are the Graduation Rates by Area in CCSD? 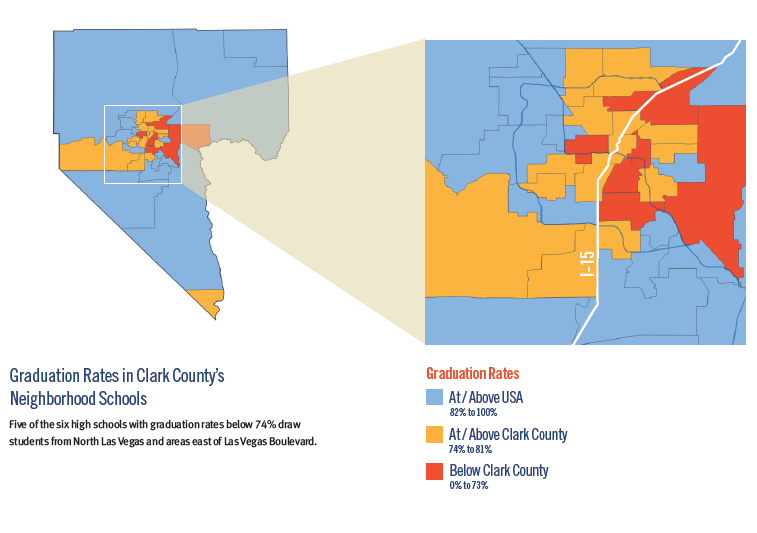 IN THE NEWS
United Way of Southern Nevada Announces Election of New Board Members
Thursday, February 13, 2020